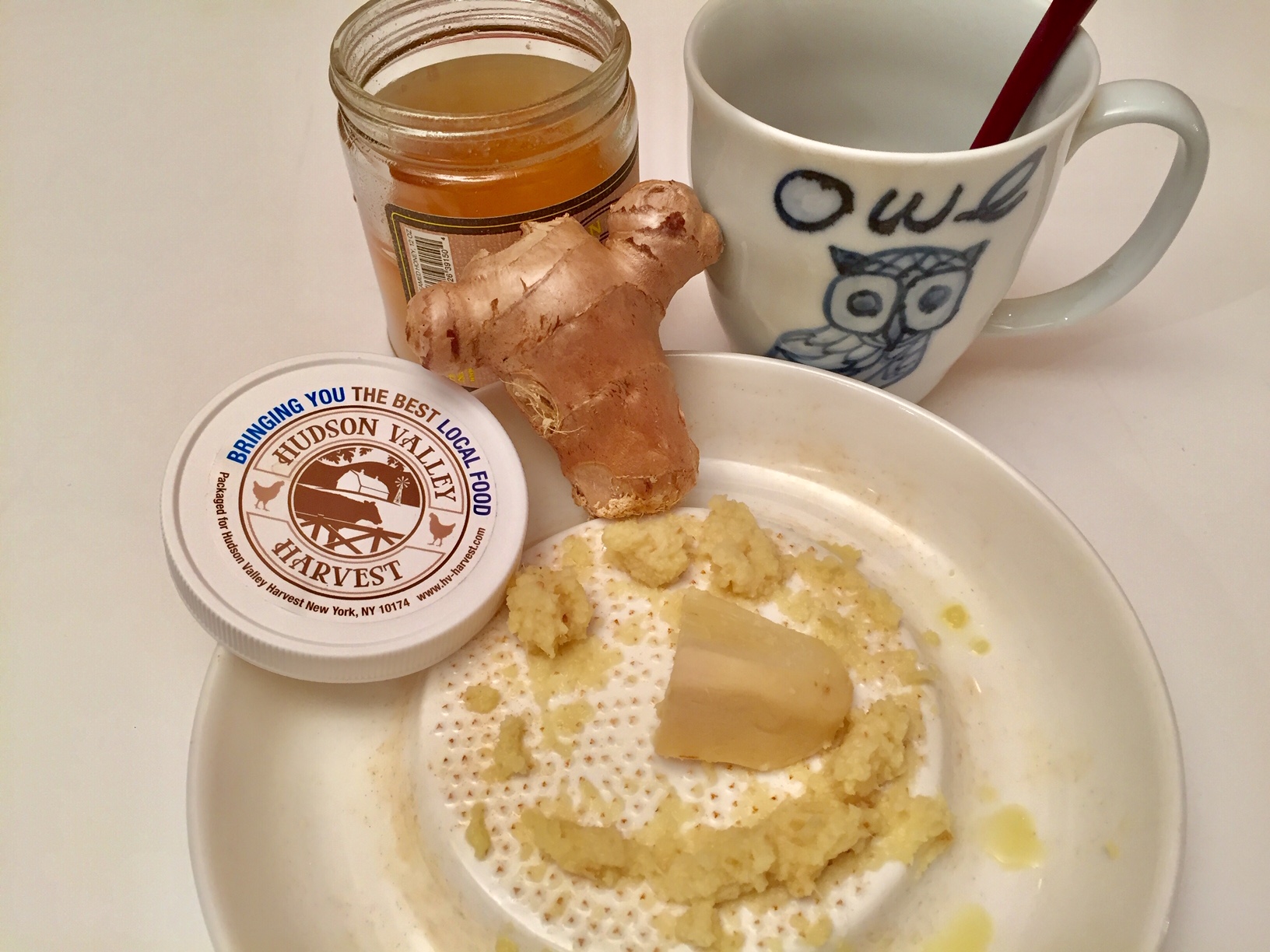 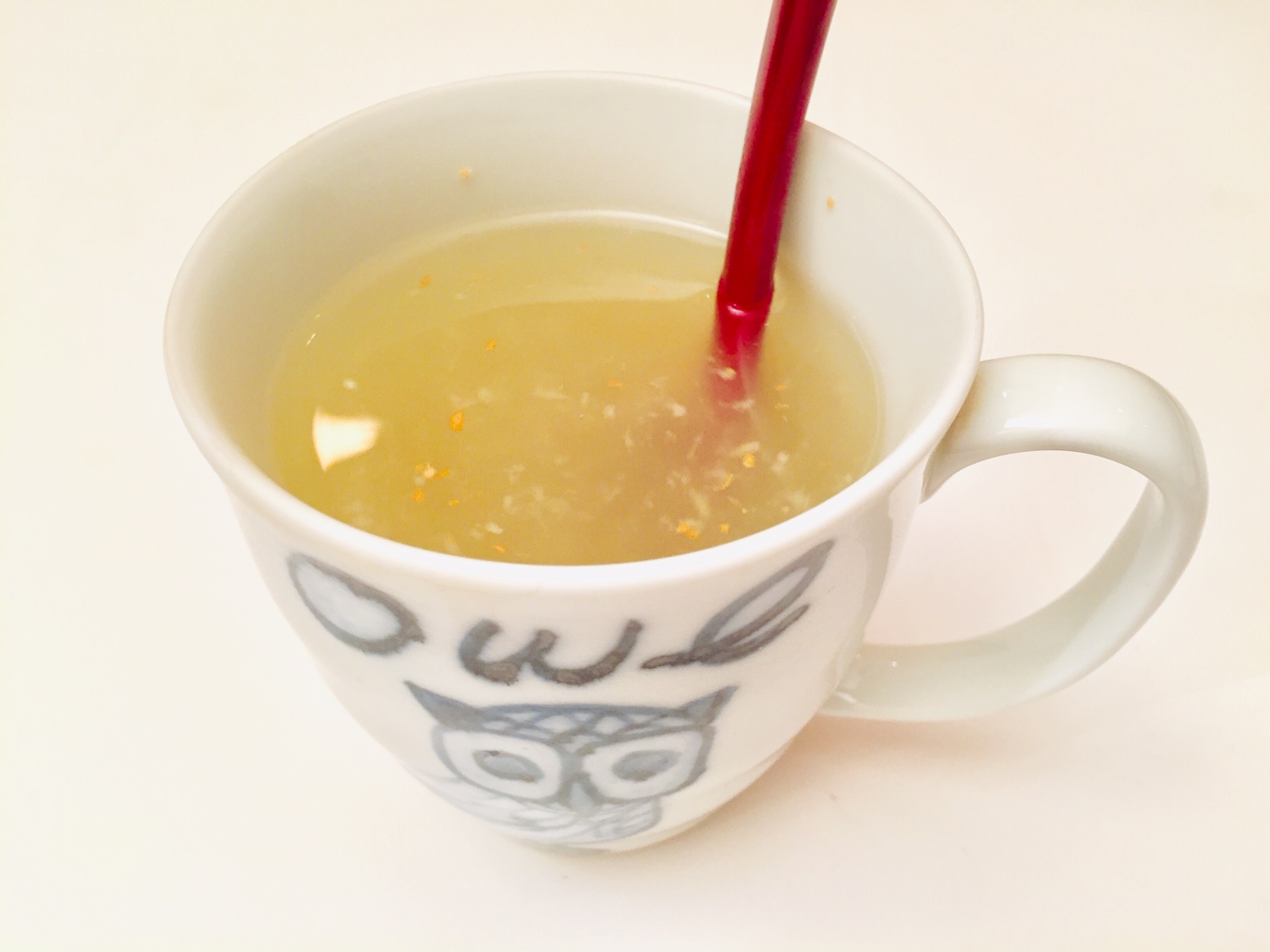 Is there anyone out there who has cold feet, hands or body; anyone who desperately wants to warm up? Make this simple hot drink. You need only three items. They are fresh ginger, honey and hot water. Grate 1 teaspoon of peeled ginger and add to your coffee or tea mug; add 1 teaspoon to 1 tablespoon of honey (if it is available get the locally produced honey); carefully pour in about 1 cup very hot water; stir the mixture; let it cool off a bit and then enjoy! Have this hot sip once or twice in the morning and perhaps before going to bed. It warms up your body and your mind.

The very first time I ate gingerbread happened just several days ago on Christmas eve at our friend’s house.  Growing up in Japan I had no connection to or affection for gingerbread even after living in New York City for 19 years. The taste of ginger which is so familiar in my Japanese cuisine actually tasted quite different in this new-for-me cake. Dried ginger powder as is used in gingerbread is not a Japanese kitchen staple, but the fresh rhizome certainly is.

Ginger, shoga, is one of the most representative spice used in the Japanese kitchen throughout the year.  Shoga has been cultivated in China since antiquity and was introduced to Japan around the 2nd or 3rd century AD.  The Japanese climate is a good fit for growing shoga and the cultivation of the rhizome began in the 7th century. In the Japanese kitchen shoga is always used fresh.  To cook strongly flavored fish or meat we add sliced shoga to the pot. Shoga cuts off any overly strong flavors of the ingredients and produces an appealing and balanced flavor in the prepared dish.  Shoga in Japan is used fresh – grated, finely julienned, sliced thin or pickled –  to become a garnish for prepared dishes. It may be served as a condiment with a prepared dish. The fresh fragrance and spiciness of the rhizome awakens and entertains diners’ senses and is a very characteristic feature of the Japanese meal.

How was ginger chosen as the primary flavor in the cake or cookie that is called “gingerbread”?  Ginger root traveled from China to Europe via the Silk Road during Middle Age giving the spice great value.  Sarah Nelson’s Grasmere Gingerbread blog says that, “The legend of the Gingerbread Man has a long-established provenance in mainland Europe. It is thought to have first appeared at the court of Queen Elizabeth 1st who presented courtiers with gingerbread likeness of themselves at Christmas.”  Sara also mentions that, “For the Chinese and Romans ginger was a symbol of wealth and fertility.”  These may be some of the reasons why gingerbread came into being.

Ginger has long been known in China, India and Arab countries as a traditional herbal medicine. Those medicinal-use teachings were also introduced to Japan. We use ginger in Japanese preparations not just to awaken and entertains the diners’ senses, because of ginger’s many medicinal properties. One of them is that it is said to warm our bodies including our intestines and organs. Ginger also aids digestion, and as you may have heard, ginger calms nausea and vomiting.  In the Japanese kitchen ginger is also known for its antiseptic and antibacterial properties. Grated ginger always accompanies oily fish sashimi such as aji (horse mackerel), sanma (Pacific pike) and iwashi (sardines) because these delicious, but oily fish are known to spoil rather quickly. The grated ginger helps to deal with any bacteria that might be multiplying in these fish.

Next year I will introduce you to more information about medicinal foods in the Japanese culinary tradition. Until then, let’s eat local and seasonal to maintain the health of both human beings and the earth. And no processed food by any means. Eat what nature gives us, not what the factory supplies.